Looking at Microsoft’s new Surface Go, it’s hard for us not to think of an iPad. Almost the same format, same large black screen outlines (iPad 1 and Air), approaching weight, etc. The rear design is more angular, there is a mechanical part (an easel), we can add a Micro SD memory card (hello Apple!), Etc. but overall, the two devices are similar in appearance. The major difference is obviously in the system that powers the device: a real good Windows 10. Has Microsoft found its answer to the iPad with its 10-inch Surface?

Less subject to the volume constraints of classic industrialists in the PC world, Microsoft’s hardware division has always had the luxury of caring for the rare devices it has launched. Over the iterations, the Redmond company has acquired a great deal of know-how, so much so that the comparisons with Apple are not exaggerated: the fit of the pieces is perfect, the touch of the keys on / off and volume +/- on the top is excellent and the matt metal of the most beautiful effect. The foot of the easel is, for the first time among the Surface, devoid of notches and orientable at leisure over about 170 ° which makes it more practical than that of its ancestors.

This beautiful bill has a reverse. For a while now, Microsoft has been badly pinned down by iFixit for the impossibility of repairing Surface in the event of a problem, breakage, etc. An identical observation with this Surface Go. Certainly, computing in general tends towards ever thinner devices, with components all soldered to the motherboard, but it is not because it is the choice of the majority from the industry we have to salute him. And given the thickness of the machine (8 mm), it does not seem inconceivable that engineers can set up slots to change RAM and / or SSD disk (the M2240 format is as small as a strip of RAM). This is less an engineering problem than a will, and that is what we blame the industry as a whole, not just Microsoft.

We can really work with

Why offer an iPad format device in Windows 10? To take advantage of an operating system (OS) cut from the start for work and not media consumption – yes, you can work with an iPad, but the OS is less suitable than Windows or Mac OS. The 10 inch format is obviously less pleasant to work for a long time than a 13 inch PC, but we were surprised by the comfort that this small machine can offer. This contract is fulfilled thanks to the quality of its screen – the definition of the 1800 x 1200 pixel panel offers good legibility of characters, even with accents – and the quality of its keyboard.

If its performance is nothing extraordinary – the Pentium 4415Y clocked at 1.6 GHz is not a monster, far from it – this is more than enough not only in everyday life, but even for occasional “heavy” manipulations. We were able to choose, develop, crop, export and resize 26 Mpix files from the Fujifilm X-T3 with Adobe Lightroom CC and Photoshop CC to illustrate this article. Yes, we had to wait a little while for the software to launch and the exports took more time than with a good big Core i7, but nothing really disabling for mobile use.

The strength of Windows is the huge repository it has. With Windows 10, you can still run old programs, either through native Windows emulation (compatibility mode) or through software tools like DOSBox. Old utilities that are hard to do without for certain uses – I love Antrenamer and Faststone Viewer – through software that is a bit dated but that still works (my old Antidote 8 is enough for me for example). Not to mention the Office suite, creative software (Lightroom CC and Photoshop CC work very well) and of course… video games. Unbeatable also in this area, Windows is the platform richest in titles.

If the graphics circuit integrated into the processor – a poor HD Graphics 615 – is not able to run the best current 3D games in Full HD at 60 frames per second, Windows has a huge catalog: unless you swear that by the most resource-hungry titles, any small PC like this Surface Go can allow you to play, whether they are old titles that we find on Good Old Games or light independent games. Personally, the pleasure of being able to play Baldur’s Gate – Remaster or Torment: Tide of Numenera, on the move, on “tablet”, without having to buy the title on Android or iOS is a real plus. Not to mention the wonderful Into the Breach!

Without the keyboard, Surface Go can be used like an iPad. If Windows 10 is logically less efficient than iOS or Android, the “Tablet mode” of the OS does the job and Windows Store applications such as Netflix work as on any competing device (offline mode, presentation, etc.).

The quality of the ergonomics will obviously depend on the nature of the applications – Paint 3D supports pinching / zooming which is not the case with the old Paint – and their age. The old software and their small icons are not there to make the work easier but we are doing anyway – thank you the virtual keyboard that appears when the physical keyboard is detached.

From a fun point of view, the right click on the screen is not always properly supported and the touchpad and its buttons may be required. Without being a gaming machine, the Surface Go has access to enough interesting titles in the PC world to be able to have fun at low cost.

The Surface Go benefits from the same charging socket as the old Surface models, a sort of 3 cm wide thing designed “with the feet”: owner, rather fragile, not easy to find when you have lost it (and expensive). A choice legitimized by the fact that Microsoft intends to allow its users to take advantage of their old chargers. An excuse just acceptable: we understand the reason, but at a time when most of smartphones, most tablets and many computers have moved to USB-C (like the whole range Xiaomi … or Apple! ) we say we’re swimming in the middle of 20e century. Certainly USB-C is not enough for large gaming laptops that draw 350 W, but in the case of our Surface Go, even the charger of our Google Pixel C tablet is enough.

Good surprise: the only USB-C socket can also charge the tablet! Why then not have integrated two (or even three) sockets of this type? An additional socket would have extended the working comfort of users by allowing transfers from a USB key / memory card to a hard disk, by limiting the number of chargers to take (a beefy USB-C for the Surface and the phone) , etc. Hopefully Microsoft will hear our complaints and give up its thing in favor of (many) USB-C 3 sockets. For the Surface Go 2?

The Surface Go is not a marathon runner: 6:29 in Full HD video endurance h264 (5:25 in h265) and 6:38 in our versatile review. In real life, these 6h and wheelbarrows are accessible without too much force as long as we do not use software that is too greedy. With Lightroom CC, a fortiori in RAW treatment, this endurance will have to be largely reduced.

For intense use, count 4 hours, moderate 5 hours, in consultation mode 6 hours. It’s not huge, but in the case of a plane trip, a powerful external battery (which can output 15W) can quite continuously power the Surface Go – the advantage of the Pentium Gold 4415Y is that it is an energy-efficient platform, the screen being probably the element that eats the most.

The detachable “Type Cover” keyboard and its integrated touchpad are a huge surprise: not only do the keys provide a pleasant typing for the format, but they are also backlit. We can work efficiently and charge the copy: this article as well as our handling of the Fujifilm X-T3 have been fully written, illustrated and mounted in our (awful) backoffice with the small Surface Go and often on the plane .

These two articles mentioned above were written entirely (or almost) during flights in Europe, a feat made possible not only by the small size (and lightness) of the whole, but also by the effectiveness of the Type cover. An accessory whose touchpad offers a touch worthy of very good PCs, which is not nothing.

10 inch format requires, beware of too long typing periods: after a while, the contraction in the forearms turns out to be more intense than with a keyboard with “normal” dimensions. As such, Surface Go should not, in our view, be your only work machine.

A configuration to avoid, a dubious marketing promise

In advertisements, the Surface Go is always highlighted with the enticing promise “from 449 euros”. Let’s not go by four ways: if this starting price is not a lie – the machine exists – it is nevertheless a mirage. The basic configuration is inefficient with only 4 GB of RAM and 64 GB of eMMC storage, a flash memory format that is not very fast. Too fair for daily use and not cut at all to ensure over time.

The configuration we wanted to review was the version equipped with 8 GB of RAM and 128 of SSD, a disk in PCIe version, faster than eMMC. It was a good thing for us to request this configuration: it is the only one available to Microsoft’s press loan fleet. Indirect proof, if one was needed, that this is the best version to highlight in the reviews …. The problem with this model? It is more expensive: 599 euros.

Too high a tariff? Not exactly: if the keyboard was included we think it would be a great deal – we have been dreaming of a “serious” device running Windows for years and able to slip into any bag. The problem is that the keyboard is optional and the bill is heavy: from 99 to 129 euros depending on the model. In the case of our review configuration, the addition therefore amounts to 728 euros. Far from the promise of “449 euros” ads … and that’s what we blame Microsoft for: making ads at 449 euros while pushing the readers of more expensive machines to readers – and therefore potential consumers – .

If we put this promise aside and evaluate the product in terms of its services rendered – offer a 522 g tablet (764 g with the Type Cover which weighs 242 g) which we can transform into real PC to be able to (really) work, so the price of 700 euros seems much more acceptable. Or even downright affordable if we are looking for alternatives: a 10.5-inch iPad Pro with 64 GB costs 739 euros… without a keyboard! 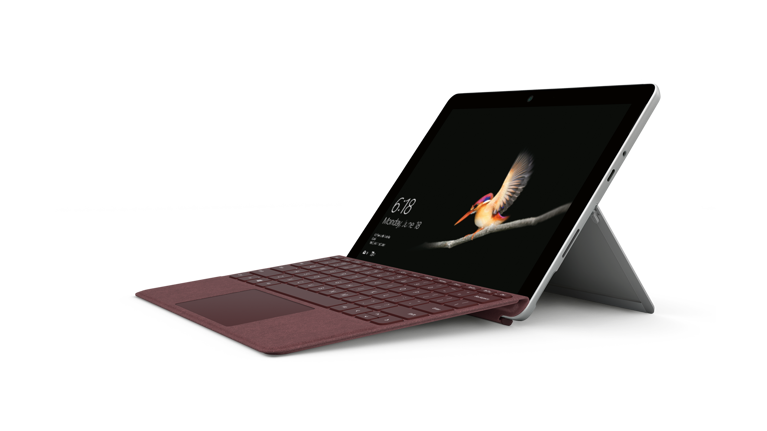 Is The Surface Go A Real Computer?

Be the first to review “Microsoft Surface Go: the full review 2020” Cancel reply