Xiaomi Mi 10T and Mi 10T Pro: here are all the specifications and design of the new smartphones

Xiaomi is preparing to launch two new smartphones on the market. The Xiaomi Mi 10T and...
Read more
Android

Facebook: the sovereign social network shows what it can do

Facebook did not yield to the Australian government's ultimatum and banned news from its platform. ...
Read more
Gaming

Realme 6 Pro with (some) specifications confirmed before listing

Realme recently presented its new flagship, but that does not allow it to stop in time....
Read more

After all what is Huawei’s Harmony OS? This video shows everything!

Huawei should make its own operating system, called Harmony OS, available for its mobile devices from next June. This is his response to the blockade imposed by the United States of America and several associated restrictions.

We are facing a platform comparable to Google’s Android operating system. Incidentally, this may be the new “OS” used by Huawei in all future smartphones and mobile devices to be launched on the market by the Chinese manufacturer.

We recall that Huawei was prevented from negotiating with US companies. Something that would not only affect its component suppliers (hardware), but also deprive it of Google services (software), even if it can continue to use the Android operating system since it is open-source, thus not belonging to any entity toilet.

Above we have the possibility to discover the main functions, menus, transitions and structural differences of Huawei’s Harmony OS 2.0 operating system. The software is still in beta, continuing to be developed and prepared for the user.

Anyway, we can already see the main features and news of the platform thanks to this walktrough published on the Chinese social network Weibo. We are facing the 2.0 version of the system, integrating the improvements prepared by the Chinese manufacturer.

Furthermore, it should be noted that the phone used in the video is the Huawei Mate 40 Pro, the company’s current high-end device that came to lead, albeit briefly, the market mobile.

Visually pleasing and structurally fast, this is the alternative to Android

Huawei’s platform has several visual and structural similarities with the Android operating system developed by Google. However, there is a notorious expediency, or speed in opening apps with Harmony OS 2.0.

This speed and quick response of the smartphone shows us the power and effectiveness of the software developed by the manufacturer itself. Like Apple, which prepares its iOS to take advantage of specific hardware, Huawei can follow this same path.

This would be beneficial for the user when receiving a faster and more optimized phone based on its characteristics and technical specifications. On the other hand, it would allow Huawei to personalize the user experience and work around possible limitations of Android.

There’s a lot of potential to be tapped with Huawei’s Harmony OS 2.0 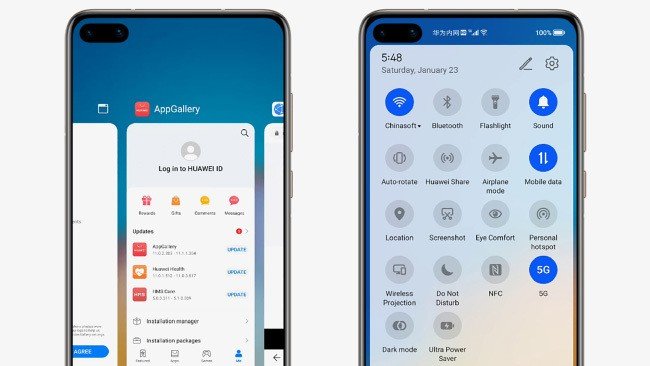 The entire platform is still being developed. For this reason and as the author of the video points out, some instability can be felt when opening games, browsers and third-party apps. In fact, this is one of the most significant challenges when developing its own operating system, ensuring stability compatibility with third-party content.

Likewise, the more specific and selective that operating system is, the greater will be your dependence on apps and own solutions. This also entails an added difficulty for possible enjoyment of Android apps, among other platforms.

In summary, there is still a lot of work to be done by Huawei, but the results presented above are promising. Not only does Harmony OS look elegant and well-crafted, it also appears to be very fast when opening installed applications.

It remains to be seen what structural points it shares with Android. You will have your kernel itself, or was it encoded from scratch? In any case, we have more responses to be put forward by the brand itself over the next few weeks.

Visually similar to the EMUI 11 interface, based on Android 11, Harmony OS 2.0 will be crucial for Huawei’s future.

*The article has been translated based on the content of https://4gnews.pt/afinal-o-que-e-o-harmony-os-da-huawei-este-video-mostra-tudo/ by 4gnews.pt
. If there is any problem regarding the content, copyright, please leave a report below the article. We will try to process as quickly as possible to protect the rights of the author. Thank you very much!

*We just want readers to access information more quickly and easily with other multilingual content, instead of information only available in a certain language.

*We always respect the copyright of the content of the author and always include the original link of the source article. If the author disagrees, just leave the report below the article, the article will be edited or deleted at the request of the author. Thanks very much! Best regards!

If you are a recurring user of Google Assistant, you will be used to the "Ok...
Read more
Gaming

Nintendo Switch Pro will come with a screen you’ll love

The development of the Nintendo Switch Pro is no longer known today. The new console has...
Read more
Apple

One of the great news of Apple's last April event was the unveiling of the new...
Read more
Android

iOS 14.5 and PS5 DualSense support During the betas of iOS 14.5 we already knew that Apple's mobile devices (the iPhone and iPad) were going...
Read more
Apple

Apple's iPhone 13 range will be announced in September if no exceptional circumstances add up to...
Read more

If you are a recurring user of Google Assistant, you will be used to the "Ok...
Read more
Gaming

Nintendo Switch Pro will come with a screen you’ll love

The development of the Nintendo Switch Pro is no longer known today. The new console has...
Read more
Apple

One of the great news of Apple's last April event was the unveiling of the new...
Read more
Mobile

Rambo comes to Call of Duty Warzone With the famous phrase "turn into war”, The official Call of Duty account has published a first teaser...
Read more

BlackBerry 5G will hit the market with powerful asset in 2021

BlackBerry is back. At least in part and now by the hand of the company...
Read more
Android

With the arrival of the first version beta From Android Q to Google Pixel, many users...
Read more
Android

Fortnite dresses up as Marvel with season 4

What happens in Season 4? Galactus, the World Eater, is a rather capricious all-powerful being, and it seems that he has gotten it into his...
Read more
Android

The latest Huawei smartphones no longer arrive with Google services installed. That is, no Google Play...
Read more
Tablets

Drone is first used to transport a transplant organ (video)

History was made. For the first time a drone was used to carry an organ for...
Read more

Alleged OnePlus 8T goes through benchmark! I don’t think you like the news!

After we saw the OnePlus Nord being officially revealed, it's time to wait for the T...
Read more

Samsung Galaxy S11 may not have this name

The rumors surrounding the Samsung Galaxy S11 are not new. The smartphone is expected to be...
Read more

The iconic Mi MIX smartphone line is back! This is the new Xiaomi Mi MIX...
Read more

This page describes how to install Kodi 18.0 update for Android, either from an app “store” such as Aptoide, Google Play Store or manually...
Read more

Kodi 18.0 Leia Stable for Amazon firesticks and Fire TV’s has been released follow instructions to update now! In this post, we are going to...
Read more

HOW TO HACK A FIRESTICK

HOW TO HACK A FIRESTICK! THE COMPLETE GUIDE Have you ever want to know how to hack a Firestick so you can get the best...
Read more